This page presents a selection of projects from Claudia Westermann's teaching portfolio.

Re-weaving Shuangta 織夢雙檢 was exhibited from 4th to 21st July 2021 within the framework of the exhibition of the Design School Workshop | Exploring Shuangta – Heritage and Community, organised by Dong Yiping and Wang Yiwen, June 28 - July 04.

The things above the sky, the things below the earth, and the things between the earth and the sky, as well as all those things people here refer to as past, present, and future—on what, Yajnavalkya, are all these woven back and forth?

He replied: […] —on space, Gargi, are all these woven back and forth.

On what, then, is space woven back and forth?

The pattern (hua) evens what is uneven and reconciles what is not adjusted. Therefore the pattern can be the Director (zheng). Now the realization (wu zhe) [of the pattern] is the means by which you rule tendrils and align cords (chi wu yu mo).

Gargi Vacaknavi, in ancient India, was weaving the questions of life in a forum in which no women were normally permitted to speak. Jing Jiang, in ancient China, referred to weaving when she instructed her son Gongfu Wenbo on the art of government. The metaphor of weaving — ancient literature tells us — is a means for gaining agency.

Re-weaving Shuangta looks at the potentialities of weaving as a spatial practice. We have collected stories from the Shuangta community — on its social life and what it means to live with heritage. The work installed in the park close to the Twin Pagodas is woven with diverse sticks, strings and strips, integrating the collected stories, as well as image and audio materials. Open for participation, the residents may add new stories. 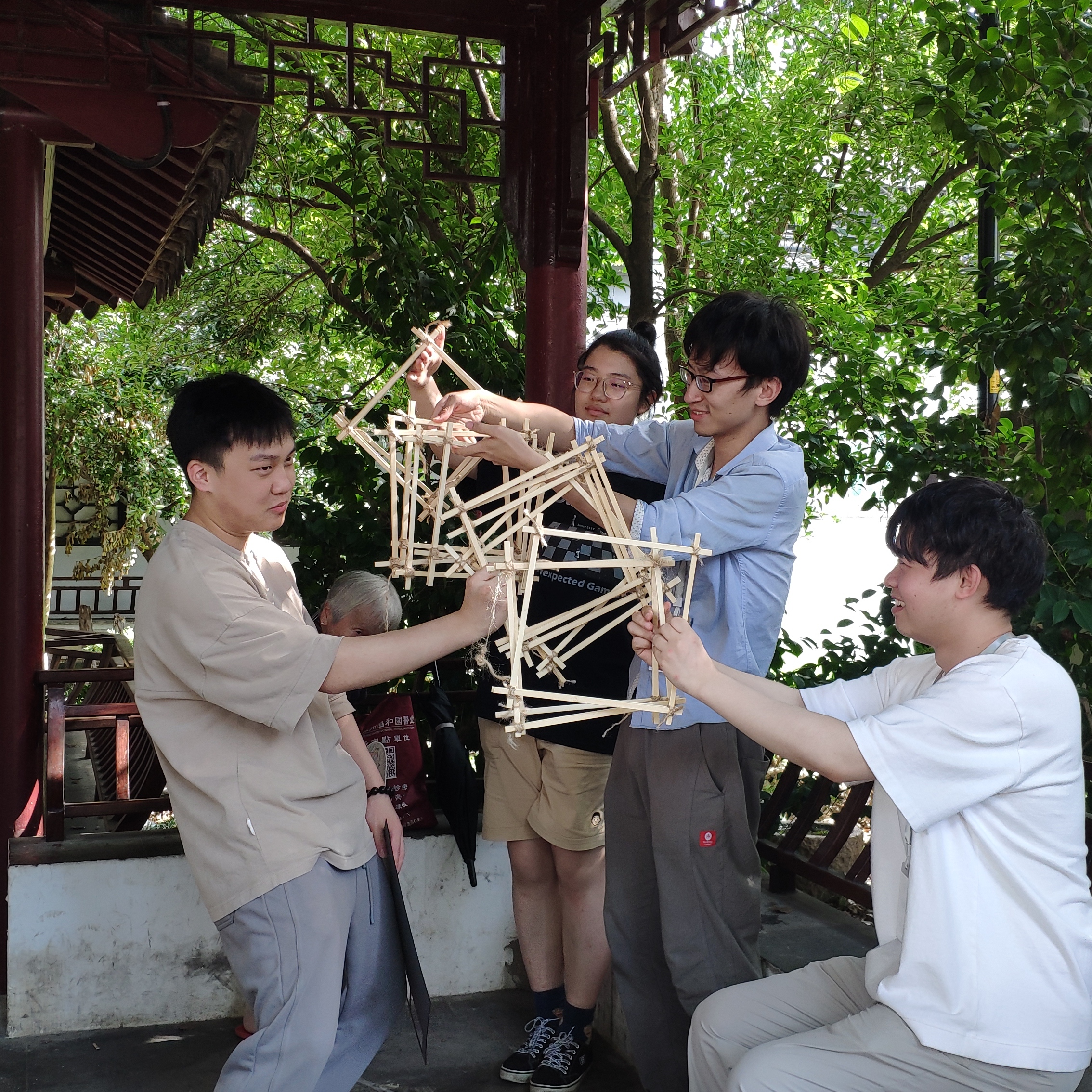 In Dialogue with Nature: Architecture for the Post-Anthropocene

In the 1968 movie 2001: A Space Odyssey, in one of the most memorable scenes at the beginning of the film, director Stanley Kubrick tells us that the dawn of man occurred with the discovery of tools (Kubrick and Clarke, 1968). Thinking objects as tools, specifically to defend and to attack, marks the beginning of technological invention and the transition from ape to human. The Dawn of Man scene reflects Darwinian theories of evolution. The focus on struggle, competition, and death as part of evolution is in line with the emphasis made by Darwinists. According to Darwinian theories, human beings are necessarily always in a struggle with their environment. We have not lived with nature but against nature. Consequently, the activities of human beings have gradually grown into a significant geological, morphological force. A new era has emerged. It has been named the Anthropocene. 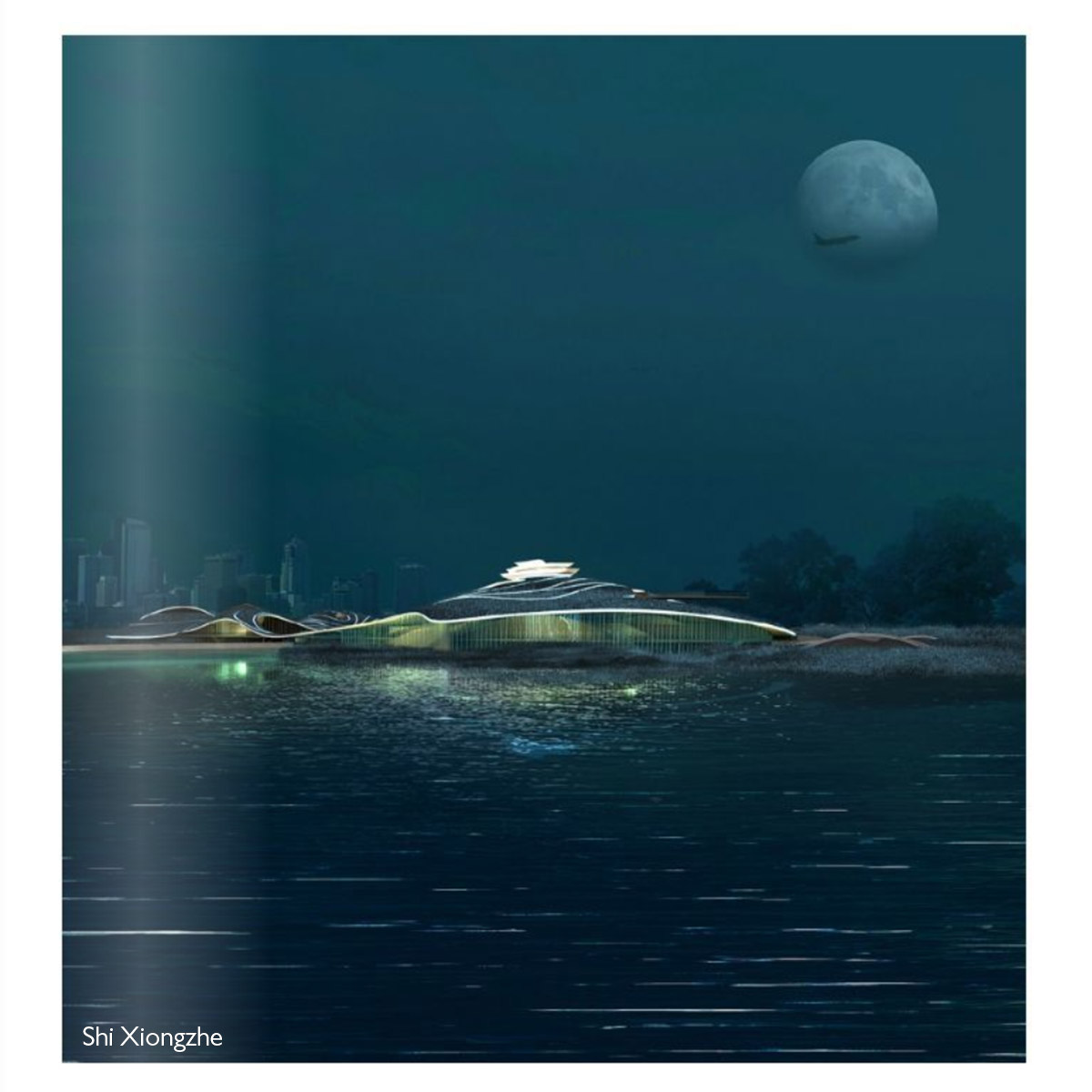 Stand in the Wind - a translation of the Chapel on Mount Rokko (Tadao Ando), multi-media installation by Wenfeng Xu 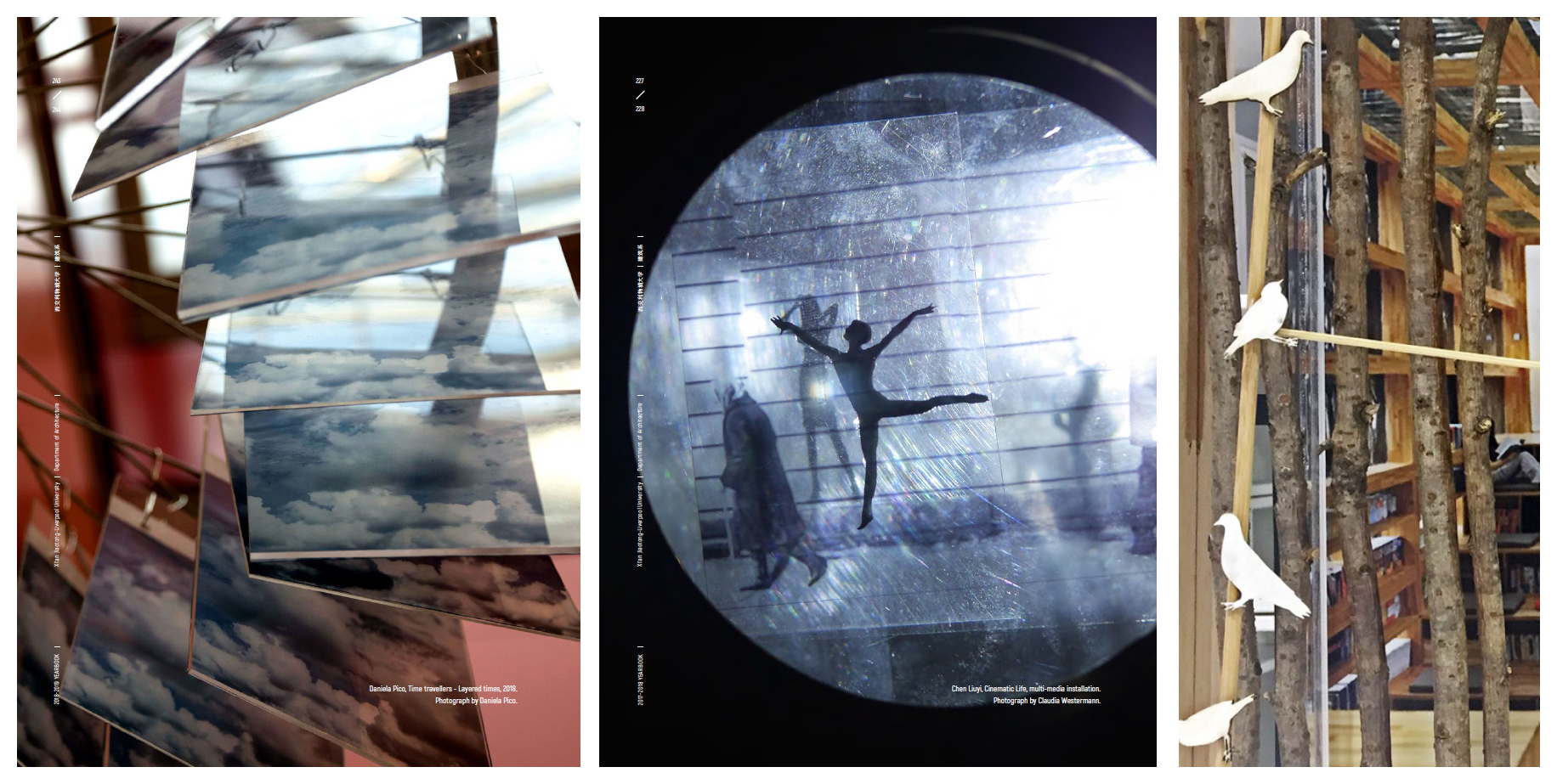 ‘Framing Indeterminacy’, a brief developed collaboratively by teachers Aleksandra Raonic and Claudia Westermann for the Final Year Project studio in Year Four received the Outstanding Design Brief award at the 2017 National Architectural Education Annual Symposium in Shenzhen, China. The ‘Framing Indeterminacy’ brief guided the students in an experimental approach to developing a new architecture of participation and exchange for a site located in Shanghai on the West bank of the Huangpu River, around 800 metres southeast of the historic Bund waterfront area. In light of recent developments in architecture that prioritise form as image, the brief suggested that students reconsider openness, participation, and performance as fundamental questions of architecture.

Two related Final Year Studio projects developed by the 2017 graduates Shaokang Li and Fuwei Shao each received an Outstanding Coursework award. Shaokang Li’s Final Year Project, ‘A Palimpsest of Old Shanghai’, captured an understanding of indeterminacy by translating a Chinese shadow play into an exquisite series of conceptual models and drawings, and subsequently into architecture. Story fragments overlap and interlace in the multi-universe of the proposed architecture. It blurs the boundary between time and space and generates new stories. Graduate Fuwei Shao questioned compositional approaches to the design of architecture with a focus on function, form and material to determine the meaning of space. His Final Year Project ‘Shifting Perspectives in the Urban Theatre’ sensibly addresses issues of control and participation in architectural design, arriving at new ways to activate and promote social interaction.

Shaokang Li’s ‘A Palimpsest of Old Shanghai’ was also awarded a second prize in the Excellent Final Year Project competition of Jiangsu Province in 2017. The project was awarded among thousands of research papers and projects presented from students at universities and colleges in Jiangsu Province

At the Grand Canal

In the past, China’s Grand Canal signified the future and a prosperous outlook for many cities located alongside its banks. The Grand Canal was the most important connection between Beijing in the north and Hangzhou in the south. Today, one could say, the Grand Canal is history, although it was granted World Heritage status by Unesco in 2015. In this module, in an area dedicated to new development in the city of Huai’an students looked into the past and future and into the possibilities for architecture to desire and to deny, to connect and to preserve, and to promise.

Students researched the history and present of Huai’an, and had the opportunity to critically engage with the concepts the city uses to promote new city developments. They could choose to rethink and to redefine the sustainable, eco, green, smart, digital, intelligent or resilient city, or create entirely new city concepts in relation to the memory and history of Huai’an. Students create visions for a future city.

The Final Year Project brief for At the Grand Canal was linked to a research project undertaken in Huai’an by XJTLU’s Research Institute for Urbanisation. The project was supported by the city of Huai’an, and maps and data were provided by the local planning office. Students who participate in this studio have the opportunity to join two trips to Huai’an with the Research Institute to meet and discuss plans with city officials, as well as the researchers involved in the project from XJTLU’s Departments of Architecture, Urban Design, Environmental Science, Business, Computer Science, and Culture and Communication.

At the Grand Canal, Final Year Project by Wang Siyao, 2015 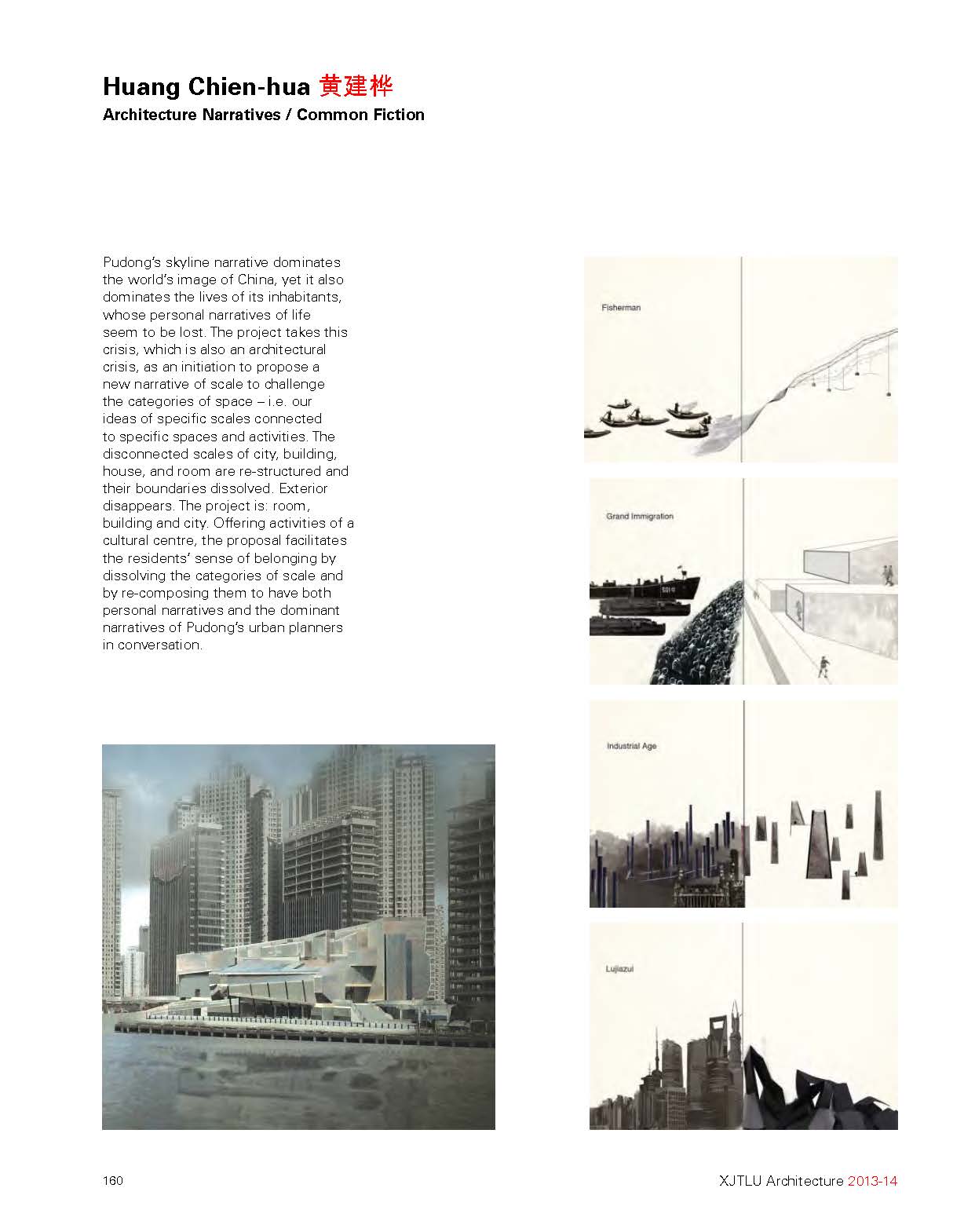 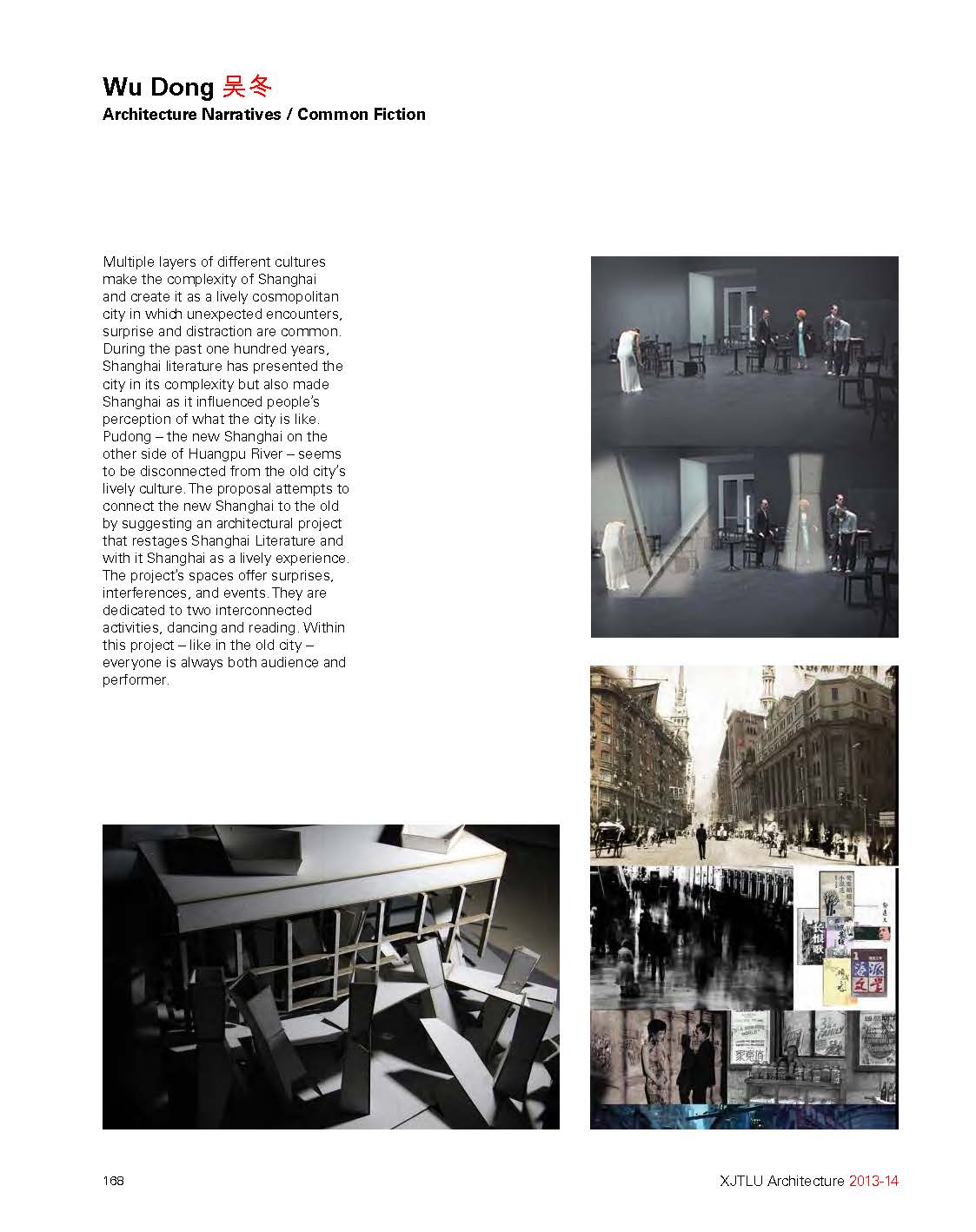